Nothing beats the tales straight from the traveler's mouth.

Mirpur is known as the “Little England” of Pakistan because 70% of the British Pakistanis are in fact, British Mirpuris. As per my personal experiences regarding Mirpur, it is a beautiful city if you are looking for something light and refreshing experience.

I found Mirpur to be versatile in almost everything. Talking about the main Mirpur city, it has a lot of grand buildings, mainly funded and constructed by the British Pakistanis. One of the most famous modern-architecture building in Mirpur is the Azad Mega Mart. It is a grand building, or perhaps it would be more accurate to say it is more of a grand shopping mall built and constructed in the British style. The environment inside the mart is unique as compared to the other malls in Pakistan. The reason is the same that it is designed in a British manner and follows a British style of shopping and aesthetics. The mart is home to many of the well known British brands and even top Pakistani brands. Many of the British Pakistanis have set up their businesses in Azad Mega Mart by renting out stores in it, in which they sell British goods like clothing, food, footwear, etc.

There is a grocery store inside as well, which sells most of the British goods be it chocolate or cereal. There is even a fun land for kids inside the mart.

Azad Mega Mart has a lot of re 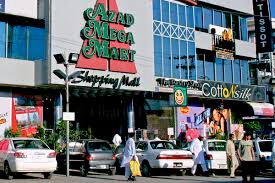 staurants of almost all types of cuisines. The quality of the food in these restaurants is also top notch. The Tandoori restaurant in Mega Mart is a favorite one among both locals and travelers. The food menu is excellent, and the taste is even better.

Among the many famous eateries in Mirpur, Mega Bite holds a special place in the heart of Mirpuris because apparently, it provides the best pizza in town. Well, it is true. I have had that pizza, and it tasted awesome. Their pizza has a crispy crust which will add delight to your taste buds when you will take a bite topped with grilled cheese. Mega Bite not only has pizza but has other continental dishes on their menu as well. So, if you are looking for an excellent Chicken Teriyaki, Mega Bite is at your service. Their Teriyaki sauce gives a hint of barbecue which adds to the flavor.

Mangla dam lies close by Mirpur. The dam is under Army control and is, therefore, under very high security at all times. Mangla is an excellent place for sightseeing and family trips. You can enjoy the cold running water through boating or dip your feet in the water by sitting beside the water.

I found a lot of local fish in the market in Mangla, and it is the most common food enjoyed by the locals. I noticed an exciting scene in these local fish markets. The fishermen of the area own these fish shops. They go fishing twice or thrice in a day and bring the freshwater trout to their shops. These fishermen have a particular type of a wooden comb or brush which has metal and sometimes wood bristles. They use these combs/brushes to remove the scales of the fish. This is such a fun phenomenon to witness. After they remove the scales, they wash and marinate the fish with their unique desi masala mixture and fry it in the hot sizzling oil. Trust me; you will never eat fish this tasty and delicious. If you want to enjoy this fish indeed then visit Mangla during the winters. The cold weather and the freshwater trout fried in spices will make you feel as if you’re in heaven.